No self-respecting Canadian waits for a warmer day…

There’s a rumor going around that we Canucks love us some cold weather.  And while I’m sure that may be true in many cases, I think it’s more likely that we Canadians love us some winter recreation -hockey, skiing, skating. Or maybe it’s just a matter of playing the hand we’ve been dealt. In most of the country, most of the winter months are…well, cold. And snowy. And what, you expect us to stay inside ’til spring?

As a Southern Ontarian, I can’t say I enjoy the winter. And luckily, in Southern Ontario, especially this year, the winters aren’t awful. So far this winter, I think we’ve maybe had three days with snow on the ground. And that’s how I got to the ripe old age of 40 without ever having skated on ice that’s a body of water at other times of the year.

But that’s not true anymore! As of this past week, I can now say I skated on the longest rink in the world – the Rideau Canal. Which also means I can cross one more of Canada’s World Heritage sites off my to-do list.

While the folks at home were enjoying mild temperatures and ditching the gloves, I spent a few days visiting my daughter in our nation’s capital, where people actually walk around the mall in snowpants.  We packed up our skates on Friday and bundled up and set out for downtown – when in Rome, etc etc.

What a cool experience! The first thing you want to consider, of course, is how you’re going to haul your skates to the Canal, (especially if you’re not driving), what you’re going to do with your boots while you’re skating, and then how you’re going to drag your skates around when you’ve had enough and just want to go shopping indoors. Luckily, my daughter’s an old hand at this, and packed up the backpack. The only thing we forgot was a plastic bag to put our wet boots into before we put them in the backpack.

You can also rent skates right there at Marker 0.0. If you have little skaters that might tire sooner than you, you can also rent nifty sleds that go right on the ice (I noticed many families using their sleds to haul their stuff instead of their kids). I think there may be a limited number of rental lockers available in the skate changing shack, but I’m not clear on that. And I suppose you could leave your boots tucked under a picnic table, especially if you’ll be returning to your point of origin (a lot of people don’t), but I wouldn’t recommend it. Take a backpack and carry on! 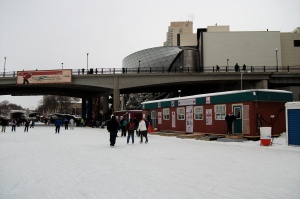 At or near Marker 0.0. (and possibly elsewhere), they have washrooms, a skate changing shack, the skate rental booth and several food booths selling goodies like hot chocolate, french fries, maple sugar candy and of course, Beaver Tails. I’ll get to those in a minute.

If you’ve never skated on “real” ice before, you should know that it’s not necessarily all shiny and smooth like an artificially created rink. There are bumps and ridges and grooves, so you’ll want to watch for those. Every little bit there are stairs that allow you to leave the rink if you’ve had enough. We skated from 0.0 to the 1.0 km mark, and then back again. I saw everything from senior citizens to tiny kids, and countless teenagers. I didn’t think to wonder why so many weren’t in school on a Friday afternoon. (though I’m wondering now) There were skaters who had clearly never been on skates before and speed demons that whizzed by in a blur.

It was wonderful! After we arrived back at 0.0 I had my next new experience – I ate a Beaver Tail! 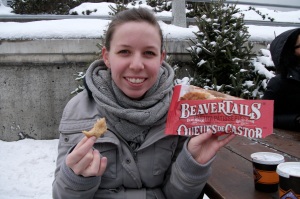 Beaver Tails are heavenly handfuls of deep-fried doughy goodness sprinkled with cinnamon sugar. I now know why so many people were upset when the Canada Pavillion at Epcot stopped selling them. You can also get them with toppings- everything from syrup to Reese’s Pieces, but I stuck with plain to start with. Frankly, after skating 2 km, I could have eaten three, but we had sights to see and kept moving.

So, if life happens to take you through Ottawa one winter day, be sure to try skating on the Canal. It’s a neat experience, and because you braved the cold, and didn’t wait for a warmer day, you’ll have earned that Beaver Tail. Have fun!

The Bay of Fundy has not made the short list for the New 7 Wonders of Nature.

It’s too bad; as I’ve been learning this year in Cultural Heritage Tourism, it would have been good for the region – and the country – if we were able to lay claim to a Wonder of the World.

However, Canada is home to 15 UNESCO World Heritage sites – that’s pretty impressive! Looking at the list, I’m sorry to say I’ve only had the privilege of visiting two of them; I’ve seen the Rideau Canal a couple of times, and drove through the Rockies several years ago. It was a lovely afternoon spent wandering in Banff, Alberta. I even got to horseback ride!

Note: If you go to Banff, bring money. Lots of money. Buying a sweatshirt to cope with the unseasonably cold August days that year would have cost more than my entire souvenir budget.

Here are the UNESCO World Heritage Sites Canada can lay claim to:

I’ll have to make it my mission – or one of my goals -to get to more on the list. How many have you visited, and what did you think of them?